What is Rock Climbing? The Ultimate Guide

In it's simplist form, Rock Climbing can be defined as the act of moving along a rocky or artificial rock formation. Just like we ice skate to get across ice, or mountain bike across trails, rock climbing is a sport dedicated to travelling across rock faces using different equipment and techniques to get up, down or across rocky faces, cliffs and boulders and structures. The goal is to get to a designated end point without falling.

Rock climbing whether it's practised indoors or out is a great sport. More than just a test of physical strength, rock climbing is about coordination, intelligence and endurance. Climbing really develops your skills at strategising under pressure. Like a chess player, you need to plan your next move ahead of the one you're about to take and think which hand or foot hold will be the best ones to get you closer to your goal. It’s undoubtedly a challenge, but always an enjoyable one!

What’s more, it’s a great group activity, for families, friends and corporates. Conquering a climbing route or your fear for heights in a group is a great bonding experience. Climbing doesn’t have to be a huge challenge. There are many ways to get involved that are more accessible than the crazy films like El Capitan where Alex Honnold climbs over 2km without ropes. Try a guided climbing session to take it easy and pick up the basics, or try bouldering at an indoor climbing wall.

What is indoor rock climbing?

Indoor rock climbing is the sport of moving up, down or across structures (usually artificial) whilst indoors. It's popularity is increasing enormously as a great way to socialise, get a good workout in for both the body and the mind and have a great time in the process. 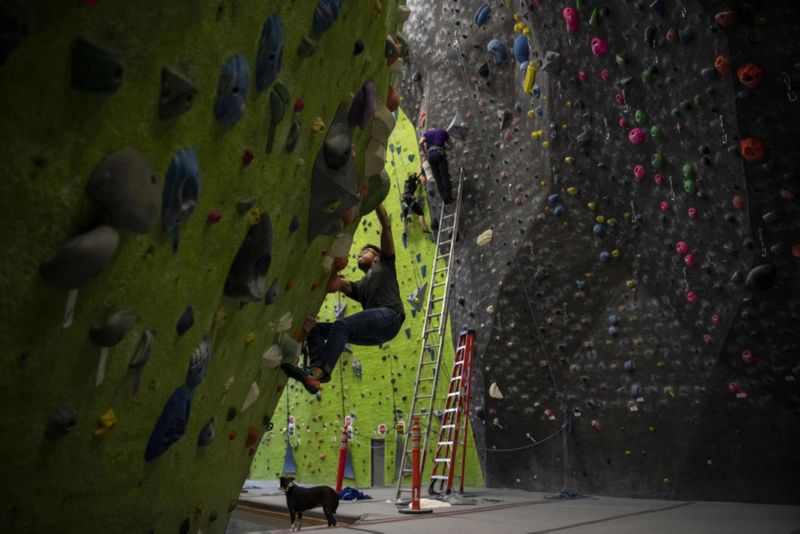 Rock climbing indoors is a great way to get involved. You're best visiting your local climbing walls website to see opening hours and how you can get involved. If it's your first time, you may need to get an introduction by an instructor for bouldering. Especially important to learn the rules such as:

- Falling in the correct way, trying to land on both feet and bending at the knees

- How to tie knots, belay and tecxhniques for climbing such as spreading your bodyweight and trying to have multipe contact points on the wall at each time to reduce strain on your whole body and reduce risks of falling

Often you'll have to pass a test to climb with a partner without an instructor. If you've climbed before and are confident, often you'll be asked questions at reception to make sure you seem to know what you're doing.

Climbing indoors is a great alternative to a gym, as you can still get a great full body workout but can also be really sociable and have a great time in the process.

What is outdoor rock climbing?

Outdoor rock climbing is how the sport originated and has the added benefit over indoor climbing of enabling your to e to being ablbut from stunning perspectives. You can go much higher than indoors which often allows you to do 'multi-pitch'' climbs. Multi-pitch climbs are those where you have stops between ascents with belays at each stop. Each stop near a belay is called a pitch. 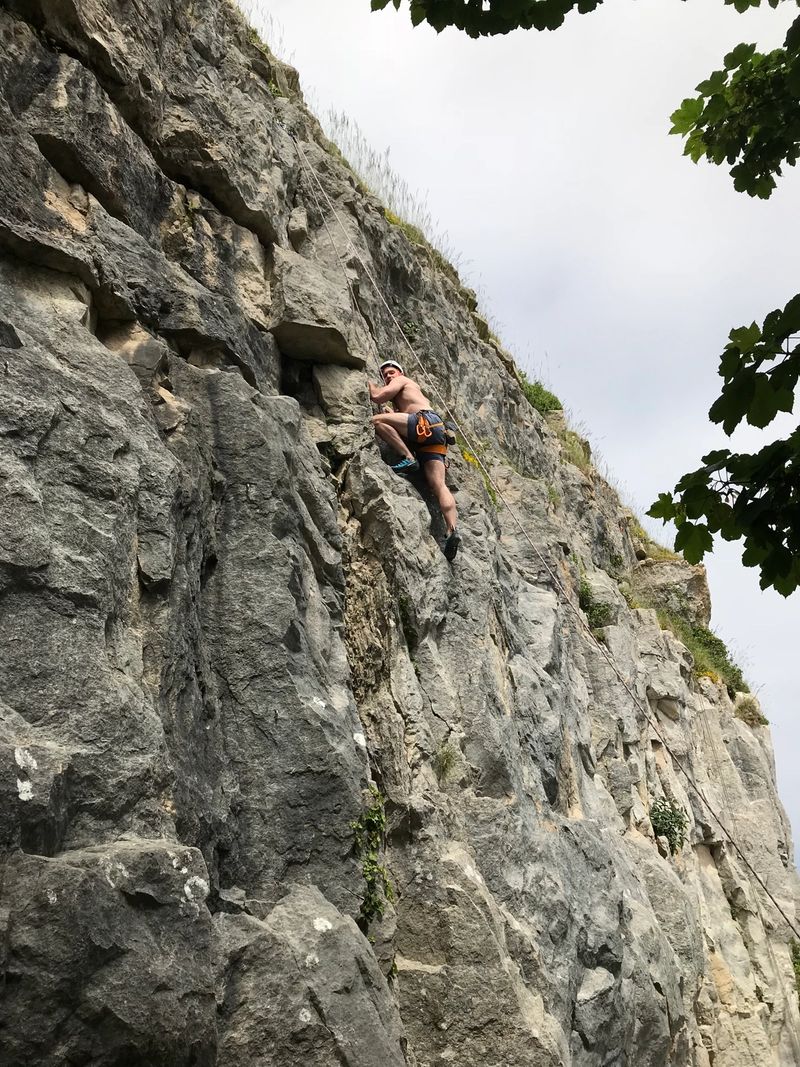 What are the origins of rock climbing?

Rock climbing may be classed as a recreational sport in the twenty-first century, but that hasn't always been the case. It took a series of developments at an international level, starting way back in the nineteenth century, for it to evolve into what it is now. With flights and accommodation increasingly affordable, travel in this day and age is taken for granted. In Victorian times travelling was a major adventure and limited to the advantaged few. Back then, not many people had witnessed the amazing wonders of Mount Everest or the Matterhorn, let alone contemplated climbing them!

During the mid-eighteen hundreds, some of those privileged Victorian travellers visited the Alpine regions. Impressed and inspired by the successful ascent of several major peaks, they brought their passion back to the UK and formed the Alpine Club. In essence a gentleman's club for climbers, the Alpine Club was and still is influential in the development of Alpine rock climbing and mountaineering.

In the UK, it was the iconic ascent of a British peak which really set the solid foundations for rock climbing to become a sport. When Walter P Haskett Smith, an athletic Oxford student and son of landed gentry, decided to document his ascent of the Napes Needle in 1886 without any equipment, the roots of British rock climbing as a sport were well and truly planted.

Equipment used in rock climbing was still fairly basic at the beginning of the twentieth century, taking a joint effort between a group of Italian and German climbers to improve its safety. They came up with the ideas for, and produced, metal pitons and spring-loaded safety hooks called carabiners. To this day, those items remain staples in any standard rock climbing kit. That equipment, combined with new techniques they invented for using ropes during an ascent, soon meant the previously ‘unscalable’ were becoming much more feasible.

Climbing is a conundrum and part of the fun of climbing is solving the mental jigsaw puzzle of choosing the best route to make an ascent. Whilst it might appear to be a lone sport, it's the exact opposite. Climbers love to share their experiences and are always ready to discuss routes or share advice on different techniques. The sense of achievement you gain when completing a climb is rarely celebrated by you alone. It'll be felt by everyone who's been there, supporting your every move, whilst you made it to the top. 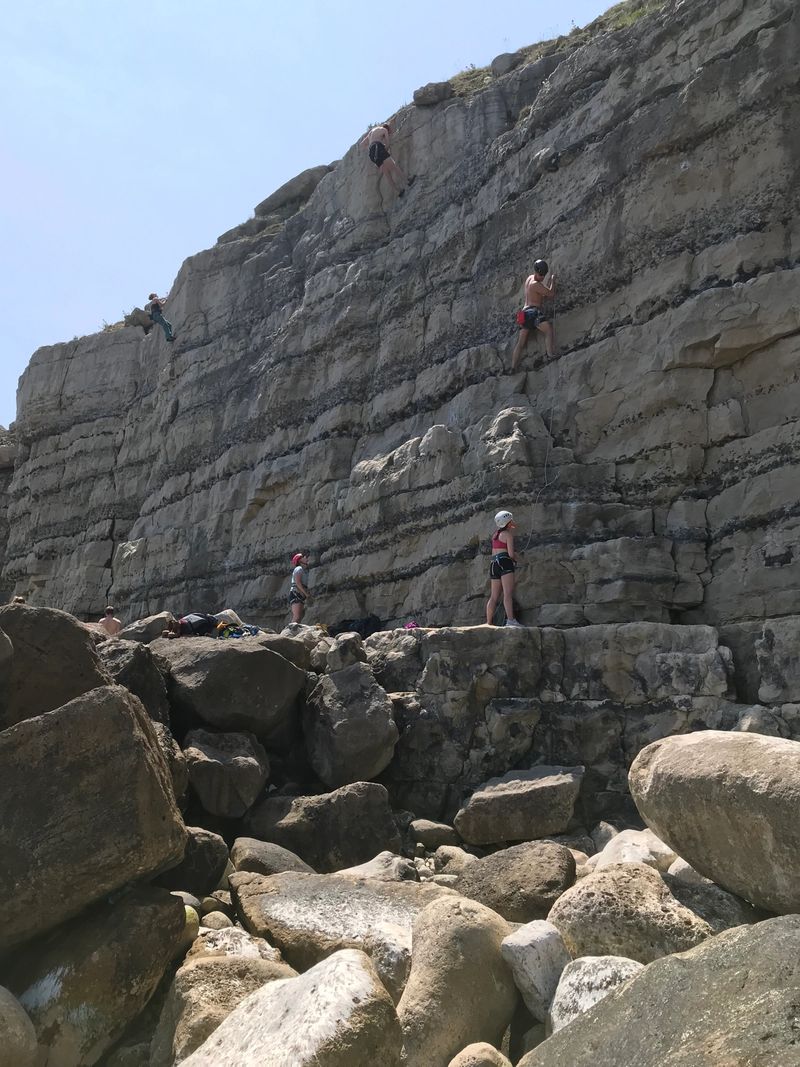 What are the different types of climbing? (and instructional videos of how to do them)

There are several different technqiues for climbing which offer slightly different levels of accessibility and challenge. Read below to see the different types of climbing.

Bouldering – Bouldering can be practised indoors or out and is a good place to begin your climbing experience. In indoor environments, bouldering is practised on either climbing walls or rocks which are, on average, no more than six metres high. Bouldering is done without ropes or safety harnesses, but there are lots of soft, protective mats to fall on to. Bouldering is also the ideal way to perfect your climbing techniques before attempting greater heights.

Top roping – Top roping is based on teamwork and requires two people. In top roping, a climber hooks onto one end of a rope which has been doubled over an anchor point at the top of a climbing wall. The other end of the rope is attached to, and controlled by, someone on the ground. In climbing terms, the person on the ground is called a belayer. The belayer controls the slack in the line as the climber ascends. This acts as a safety harness for the climber during the ascent. If the climber slips, then the tension in the rope prevents them from falling.

Lead climbing – In lead climbing the security rope is not fed through an anchor at the top of the climbing wall, but is controlled by the climber. The climber is attached to the rope, and as they scale the wall, they clip the rope in to periodically spaced quickdraws - which are lengths of strengthened webbing with carabiners either end - hanging from climbing nuts in the wall. Lead climbing requires someone at ground level to act as a belayer and feed rope to the climber as they ascend.

Speed climbing – Speed climbing entails getting to the top of a vertical climbing wall in the fastest possible time. Highly competitive, to world championship standard, this sport is often practised with no safety equipment whatsoever and believe it, you need to have Spiderman genes to do it!

Trad climbing – Trad climbing or traditional climbing is where the climber who takes the lead position is responsible for placing the protection points they will need to clip their safety ropes to as they ascend. The specialised equipment required for trad climbing is known collectively as a rack and can vary from climb to climb. Climbing this way is slower, more methodical and requires practice.

Soloing – Free soloing is climbing solo in all senses of the word. On your own with no-one else and no equipment. It's a rock climbing sport practised by only the most confident climbers who have seriously advanced climbing skills. It differs from bouldering as free soloing is typically done to heighs that are much more significant and would be unlikely to survive a fall.

Note - this is different from free-climbing as free climbing is the movement without use of equipment but relying on own ability to make progress, and equipment is used in case of accident. The two often get mixed up but are distinct ways of climbing.

Scrambling, the art of ascending rocky faces and ridges can also form a part of rock-climbing although is considered hill-walking. Rock climbing can be a very useful skill for some of the more extreme scrambling for use of ropes, foot work and technique.

What is Urban Climbing?

Urban climbing is also raising in popularity as dare devils gather more attention with more extreme stunts. The art of urban climbing is to scale building and skyscrapers. Most recently in the UK the 'Shard Climber', George King-Thompson, made a splash in media . Especially as he was locked up for 3 months of a 6 month sentence for climbing the shard. Standing at 1,017ft (310m), overlooking the whole of London and beyond, and being unaided, this was a serious challenge!

What is Abseiling (aka Rapelling)?

Rapelling, otherwise known as Abseiling can be defined as the descent of a rock-face whilst being controlled by the climber themselves. The term is derived from the German word abseilen , which translatest ‘to rope down’. It's done when there is no safer way to get down from a height.

Abseilling is done by the army, tree cutters, oil riggers, skiiers and all sorts of other jobs who need to scale heights and get back down!

Want to learn how to abseil ? Search through undreds of experiences across the UK to find your next abseilling experience . From abseilling off bridges, buildings and rock faces. Take your pick.

What equipment do you need for Rock Climbing?

The equipment you need will depend upon the style of rock climbing you're doing. Make sure you're fully familiar with all of your equipment and how to use it before trying independently as Rock Climbing can be a very risky sport when not practised properly.

Other climbing types need more kit such as:

How to get started with Rock climbing?

There's a multitude of different styles of rock climbing to choose from. With indoor, outdoor, bouldering and top roping, it's sometimes hard to know which one to try when starting out as they all have different perks – obviously the best thing to do is try them all at some point!

For example, the advantage of indoor climbing is its year round accessibility. You can still go climbing no matter what the temperamental British weather decides to do and is a great way to get into the sport before practising skills outdoors.

So apart from at the bottom, where do you start?

1) Turn up to one of the indoor climbing walls for an introductory session.