Promoting the Benefits of Getting Outdoors with #Tentman

#tentman is a campaign where the Beyonk co-founder, Oscar White, aimed to raise funds for The Outward Bound Trust and encourage more to get outdoors and get active and to raise awareness that...

75% OF UK CHILDREN SPEND LESS TIME OUTSIDE THAN PRISON INMATES

The world has changed. Parks, pools and recreational spaces are losing out to screen time as tablets and mobiles become the new window to the world.

The mental and physical health implications are well documented; with increasing levels of obesity indicative of a generation turning to online environments for their social interactions and development. Something has to give in order to proactively, rather than reactively, help young people discover the amazing benefits of getting away from their screens to explore the amazing country that we call home.

To raise awareness of the benefits of getting outdoors, we decided to do something about it. Introducing...

Tentman aims to get people intrigued, to ask why is a man running around the UK training in a tent? To open up discussion on why getting outdoors is vital for physical and mental health. And to support the brilliant charity The Outward Bound Trust that helps young adults and kids to get outdoors and gain confidence and a positive mindset through adventure.

As well as lots of training and races in the tent, the grand finale was the London Marathon where hopefully a Guinness World Record would be acheived.

Of course, no marathon attempt should be undertaken without serious training. So I entered a few races and donned the tent for several training runs. The main difficulties were having to run in an incredibly hot canvas, not being able to use my arms as I had to hold the tent in places and the wind resistance caused a lot of little niggles on my ankles being pulled all over the place. tentman?... parachuteman more like!

As well as many training runs, to push the message out there, I went on a tv and radio appearance spree, getting a few weeks of fame. 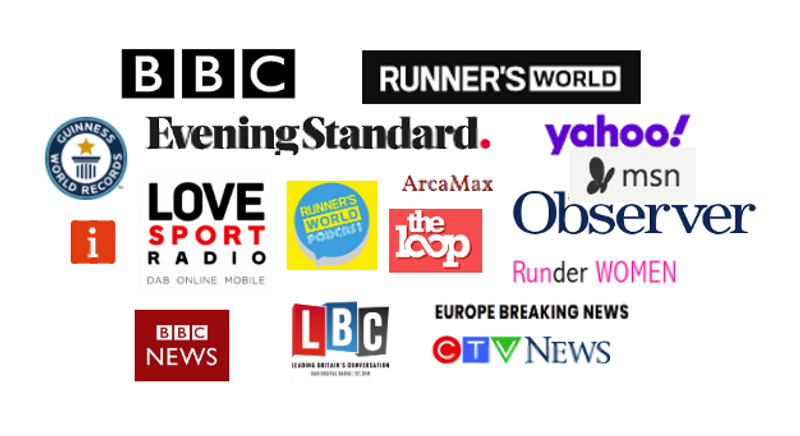 Here's a snippet of the One Show appearance where I raced a Rhino, Thunderbirds and most importantly 84 year old Eileen, the oldest runner in the Marathon, see here. 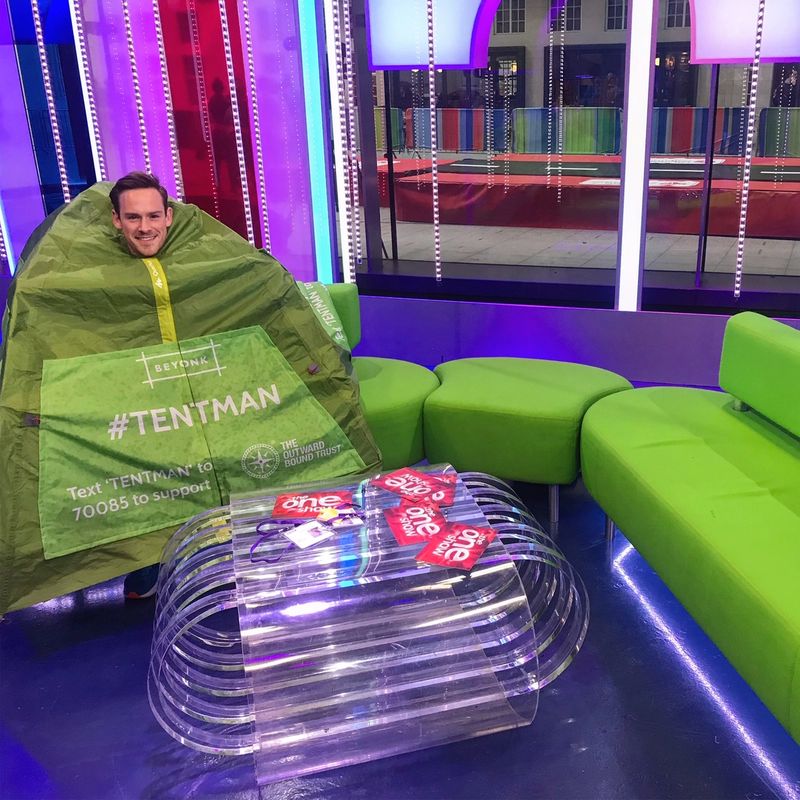 And I spoke to the team at Runners World on all things training, running and why the outdoors is so important to physical and mental health. Listen to the Runner World podcast here .

The excellent Chewingum Man even did some streetart for tentman... 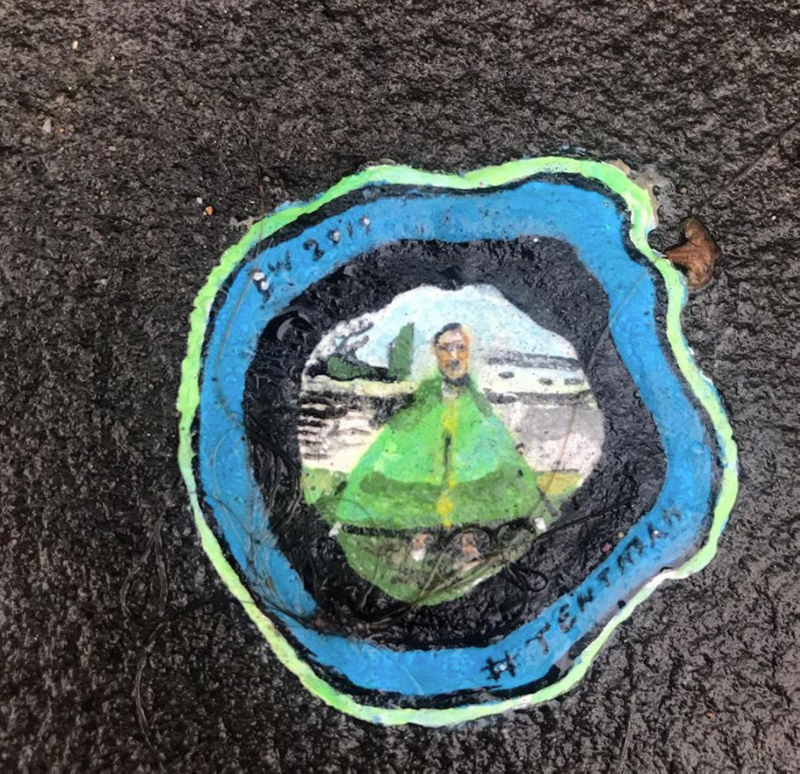 With TV, radio appearances and even art work being commissioned, the expectations were firmly set. All I had to do was run a sub-4 hour marathon in order to set the Guinness World Records for Fastest marathon dressed in a tent - no pressure right?

Turning up at the start line, excitment was high. Until another tentman turned up. What? This wasn't planned. I wasn't told there would be another tentman attempting to set the same Guinness World Records title!

Not to fear, I'll focus on my own race I thought. I set out at what was a comfortable pace. I was on for 3hours 15, comfortable running, but I ended up sweating from the sauna like tent - so much so I lost all my salts and fell to the ground with full body cramps at around the 28km mark. Paramedics thought I was having an epileptic fit. It was just every time I moved a new muscle went into cramp. Even my cheeks and fingers were cramping, making me wriggle all over the place. What could have been quite a comical scene to on-lookers. A tent, with some legs kicking all over the place out of the side.

Fortunately a man in a kebab shop ran and got me a pint of water with salt (not sure if that even works?) and someone else gave me a salt pill (which probably works better). I then had around 8 miles of slow grind, with the goal of just trying to finish. I noticed 5km out, there was a chance of still coming within the 4 hours and getting the World Record for Fastest Marathon Dressed In a Tent (assuming the other man trying to get the record was not in front of me)! 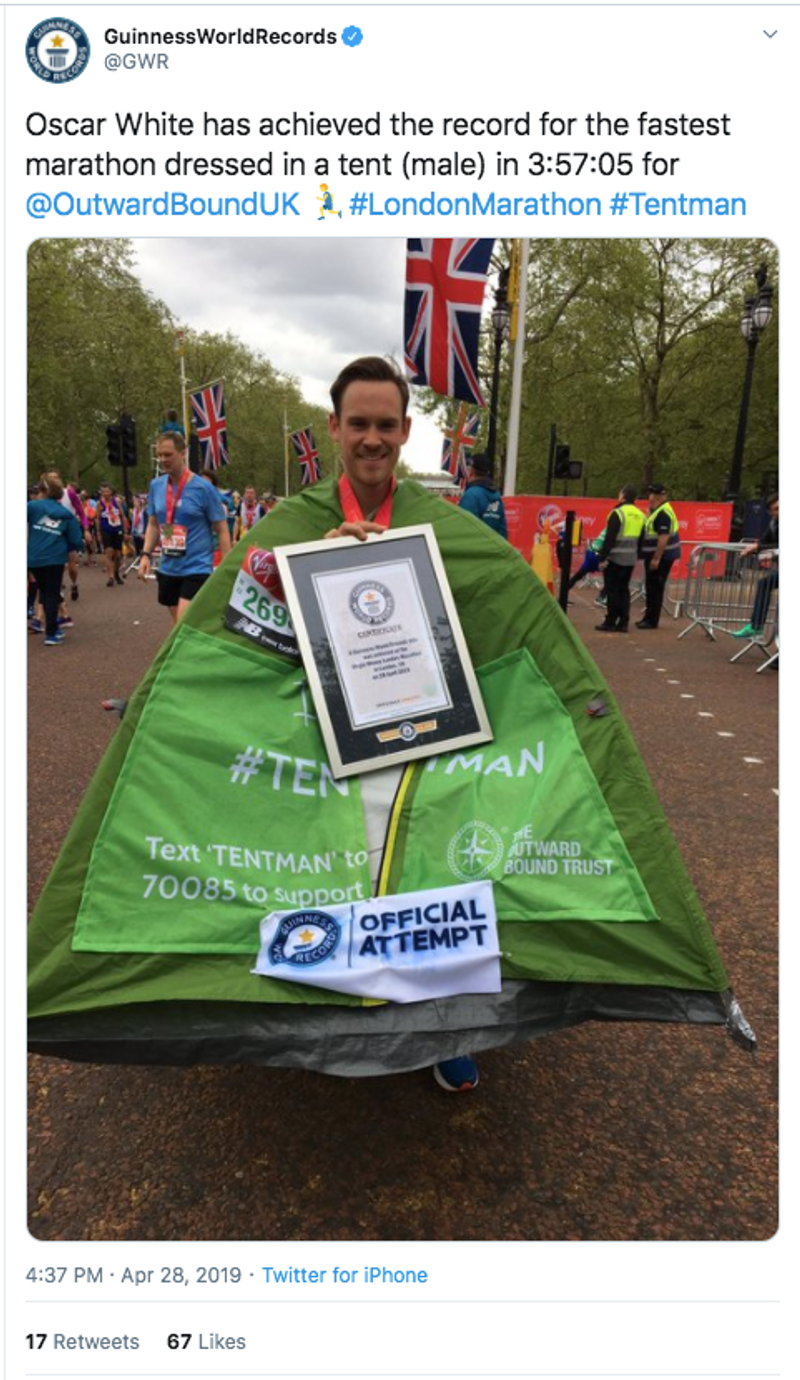 As I crossed the finish line, there was a huge amount of relief. I was told we wouldn't know if I had the World Record until the other competitor crossed the line, as he started in a later wave.

20 minutes passed and it was decided the World Record was mine. That's right. A sub-4 hour marathon in an incredibly sweaty tent. Much hard than I'd expected.

Overall the campaign was seen by over 5 million UK residents, helped by the brilliant Outward Bound Trust and Guinness World Records Team. Not to mention the BBC, Runners Need and all the others who helped us push the message out there! People were suprised by just how little kids in the UK are getting outdoors.

The tent was a way to grab attention and spark curioristy. Why on earth are you doing this? Which then opens up the discussion around the outdoors!

Tentman will continue to drop into the occasional challenge. Including in Coronavirus lockdown 2020, tentman joined the Ordnance Survey's Guinness World Record Attempt for most stairs climbed. Tentman completed 400 flights of stairs at over 978m of elevation, the height of Scafell Pike, the Highest Mountain in England.

Have ideas for other ridiculous challenges? I'd love to hear them! But for now... Get Outdoors.